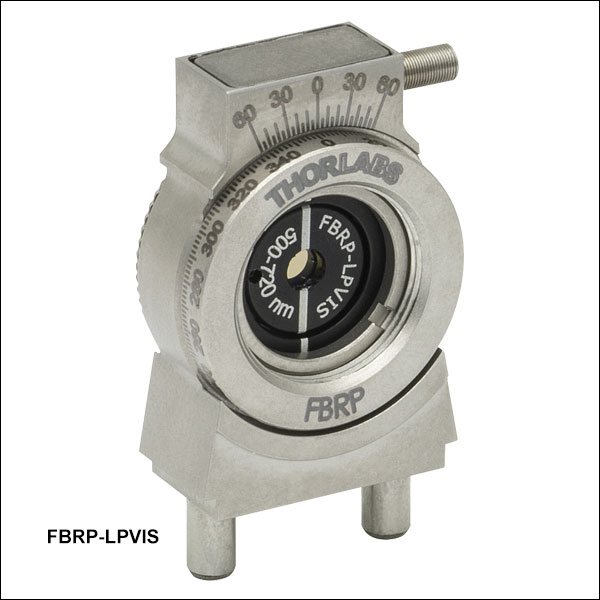 Thorlabs' FiberBench Precision Rotating Linear Polarizer Modules utilize a thin layer of sodium-silicate polarizer mounted in FBRP Rotation Mounts. These modules absorb light that is not aligned to the transmission axis of the polarizer and are designed for the 500 - 720 nm, 650 - 2000 nm, or 1.5 - 5.0 µm wavelength range. These polarizers provide an excellent extinction ratio of >10 000:1 over most of their specified wavelength range (see Specs tab for details). The transmission axis is marked by the engraved line on the front of the polarizer cells.

The mount for these polarizers features a rotating cell with a knurled edge and a 360° laser-engraved scale marked at 2° increments as well as a Vernier scale for determining angular position with a resolution of 10 arcmin. The mount also includes a fine adjustment actuator, which provides ±5.5° of precise angular adjustment with a resolution of 0.48° (28.8 arcmin) per revolution of the screw. After fastening the engagement screw with a 0.028" hex key, the cell can be precisely positioned by turning the actuator at the top of the part with a 0.050" hex key.

These modules are ideal for a variety of polarimetry applications. Rotating linear polarizers can be used to monitor the polarization of a beam whose polarization state may shift over time due to temperature or other factors; the rotating polarizer can then be adjusted to maintain maximum transmission. A rotating polarizer can measure the polarization extinction ratio of another polarizer element without having to realign components in between measurements. Also, a variable beamsplitter can be constructed using a polarizer module in conjunction with a Beam Displacer Module (sold below).

The FBRP mount can be coupled with an FBA post-mountable adapter for use in other applications. The mount is SM05 threaded and the removable polarizer cell is held in the mount with a stainless steel SM05 retaining ring for holding Ø1/2" optics (POLARIS-SM05RR). The polarizer cells in these modules are also compatible with other Ø1/2" optic mounts. When replacing a polarizer in the mount, be sure to align the engraving on the polarizer with the 0° engraving on the scale. Please note that the thin film in these polarizers is very delicate and should not be touched.