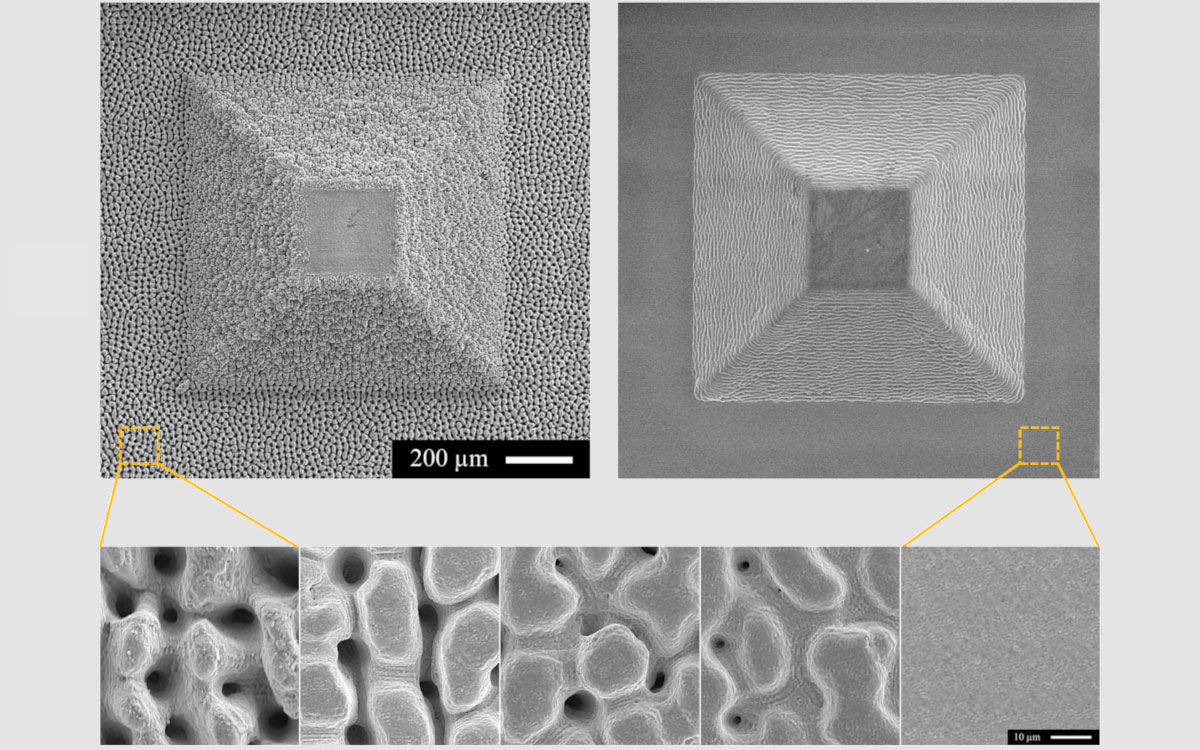 Recently a new technology has been developed that allows the splitting of a singular femtosecond pulse into a train of pulses separated either by several hundred picoseconds or tens of nanoseconds. In other words, the laser can operate in a burst regime in the MHz and/or GHz frequency domains (Figure 2). As a result of these significantly shorter delays between adjacent incoming femtosecond pulses, the light-matter interaction mechanisms are quite different when compared to a conventional femtosecond laser, and therefore this regime opens up new frontiers for precision micromachining of many different materials. 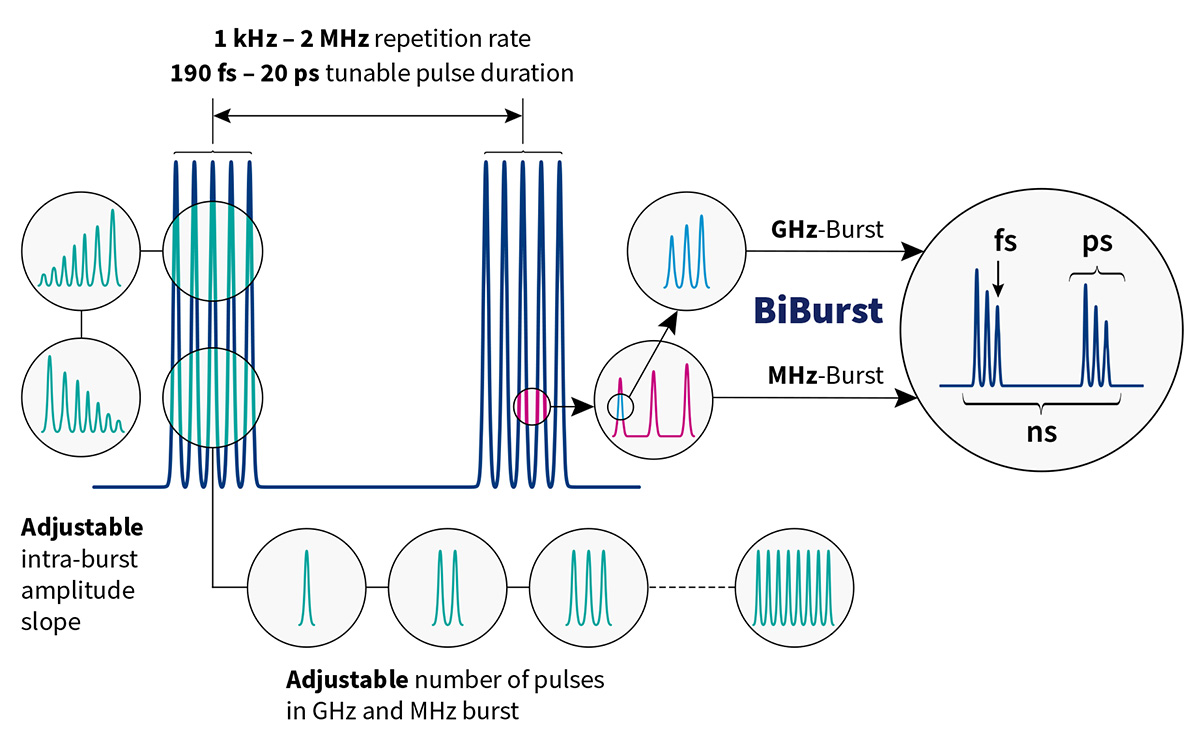 CARBIDE  is an industrial-grade femtosecond laser system offering burst-in-burst capabilities for simultaneous GHz and MHz operation, and can output up to 80 W of average power, a pulse energy of up to 800 μJ, and can operate at a base repetition rate of up to 2 MHz. The laser can emit up to 10 pulses at MHz and 10 pulses at GHz burst, which is equivalent to an effective frequency of 100 MHz. The number of pulses in each burst regime can be easily selected by software control. The burst-train intensity envelope is also configurable from declining to quasi-flat to inclining. Many degrees of freedom enable the user to quickly find the optimal material processing recipe for their application. It is well known that in using these burst modes it is possible to improve the material ablation rate per unit energy when compared to a conventional femtosecond laser setup. Moreover, the burst mode is particularly useful for drilling of brittle materials, cutting, deep engraving, selective ablation, transparent materials volume modification, high contrast marking or fabricating functional surfaces. In addition, any thermal input applied to material can be controlled by adjusting the parameters of the burst mode, even while it is being micromachined. This is particularly interesting for surface smoothing and polishing applications.

As an example, stainless steel can first be ablated with a MHz burst to achieve the necessary shape, and then polished with a GHz burst to achieve a superb surface finish. Figure 1 at top of article shows a semi-pyramid structure ablated in stainless steel and the final result after polishing with such a GHz burst. Another example is biocompatible polymer materials and composites are used for many different purposes (e.g. catheters, artificial heart components, dentistry products, vision). An important field for biocompatible polymers is the production of vision implants or custom shaped contact lenses. Diseases, such as cataracts, maybe curable by surgically replacing the original eye-lens with an artificial lens, known as an intraocular lens (IOL). One of the most favorable materials in IOL manufacturing is hydrophilic acrylic polymer. Typically, curved surfaces are manufactured by mechanical means such as milling, turning or lathe cutting. The 2.5D objects/surfaces can also be manufactured by means of laser micromachining. Here, a MHz burst can increase efficiency of surface ablation. However, due to the nature of the light–matter interaction in the MHz regime, it is difficult to produce a surface finish with surface roughness values lower than 1 μm Ra.

Therefore, laser micromachining with MHz bursts alone cannot produce the final parts with optical-grade quality. Laser machined surfaces may be polished via mechanical methods; however, the process may take up to several hours, which makes the production of implants economically challenging. By switching the laser to GHz mode, a regime has been demonstrated where the surface roughness can be minimised to Ra=40 nm, while the polishing of the entire part takes a matter of seconds. In this case, the polishing process depends on the thermal heat flux which initiates thermodynamical processes that change the surface roughness of the sample. The optimal surface temperature was found to be approximately 357 °C, at which point it was possible to polish the surface to optical quality. The produced surface demonstrates a transparent appearance and the process shows great promise towards commercial fabrication of low surface roughness custom-shape optics (Figure 3). Therefore, the industrial-grade femtosecond CARBIDE laser with tunable GHz and MHz pulse bursts can help overcome the manufacturing challenges of customised intraocular lenses. Figure 2 shows fabricated concave lens is fully transparent, smooth and bends the image like a lens. 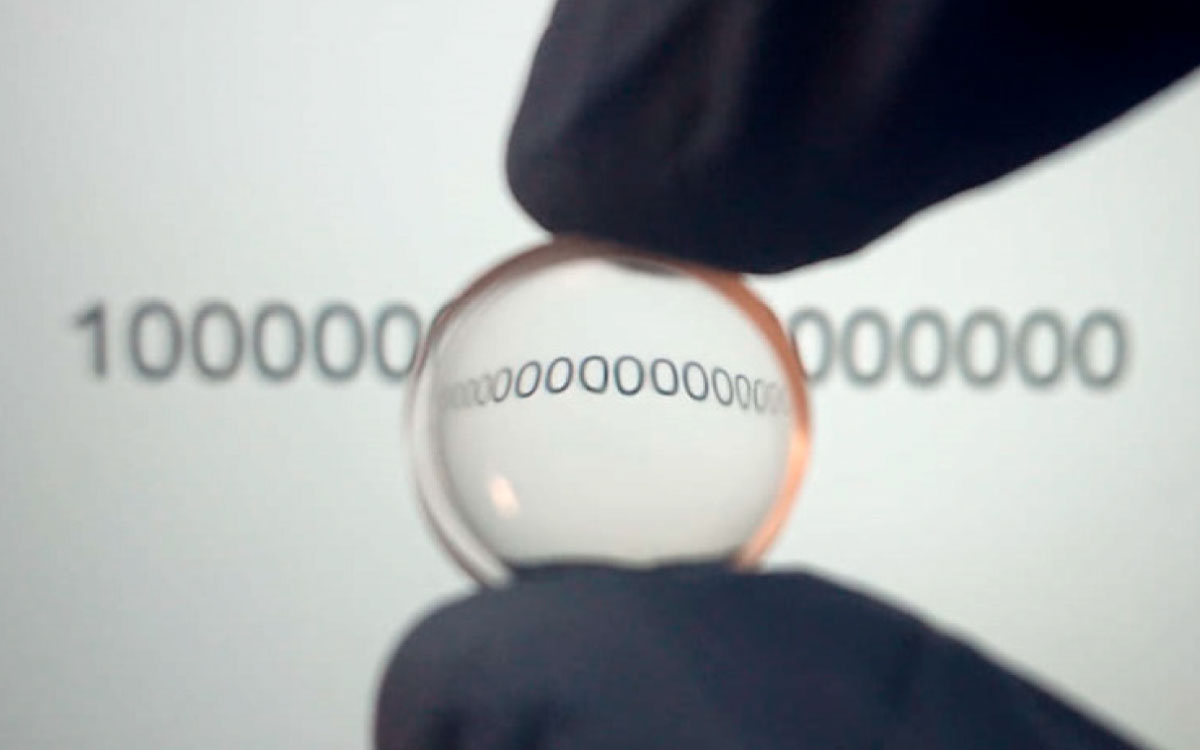 (Original article by sales engineer TITAS GERTUS was published in "The Laser User" magazine of the Association of Industrial Laser Users, issue 100, Spring 2021)