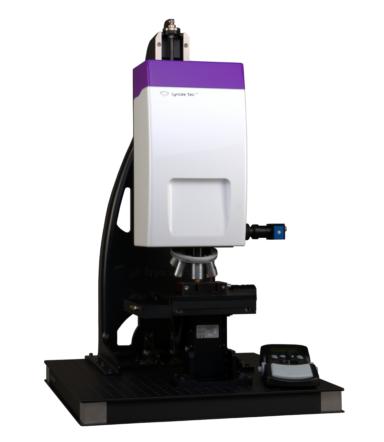 cMUT membrane response to a burst waveform composed of two periods of a sine wave at 5 MHz (in blue). Vertical position versus time of the membrane at three monitoring area (in red, green and yellow) randomly selected over the measurement field of view (Courtesy to Philips).
Unique in the Frequency Domain: Megapixel Maps!
The Discrete Fourier Transform (DFT) of 3D time-sequences in the frequency domain generalizes the conventional single point frequency analysis into mega-pixel vibration amplitude maps calculated for each DFT bins/channels.

McUT membrane vibration amplitude map: selection of three maps at 1.4, 3 and 4 MHz, among all those obtained by performing a DFT on each pixel of the 3D topography time-sequence response.
In vacuum, at high or cryogenic temperatures, or in liquids, Lyncée proposes a full range of accessories and solutions ensuring:

Unlike systems measuring the displacement of a single point on the surface of a sample, DHM®‘s unique non-scanning technique measures time-sequence of the sample surface with 3D topographies at mega pixel resolution. Indeed, each individual measurement is acquired simultaneously over the full field of view, providing at each time-point a million of data-points. This unrivaled wealth of information reveals very quickly and efficiently MEMS response to any excitation signal with unprecedented details.

The stroboscopic unit electronics precisely samples the measurement of topographies along the excitation waveform. It allows to acquired time-sequence of up to 32’768 3D measurements at a bandwidth of up to 200 MHz.

Using DHM, the time domain time-sequence measurement  of the response of a CMUT to a burst excitation provides:

As an illustration this application presents a cMUT membrane transient response to a burst excitation signal. Both time and frequency domains analysis characterization are presented. Such analysis can be further applied to arrays of cMUT and pMUT membranes, as well as to other transducers such as inertial sensors, optical and mechanical switches, MEMS microphones, among others.

Lyncée’s stroboscopic unit allows users to define any arbitrary excitation waveform with a resolution of 215  points. The strobe electronics generates this waveform and synchronizes very precisely the 3D topography measurements with it (detailed specifications).

Therefore,  excitation waveforms not only include “simple” signals such as Sine, Square, Triangle, Trapezoid, or Saw tooth but also, among others, impulses and bursts, enabling to investigate damping and respectively transient processes.