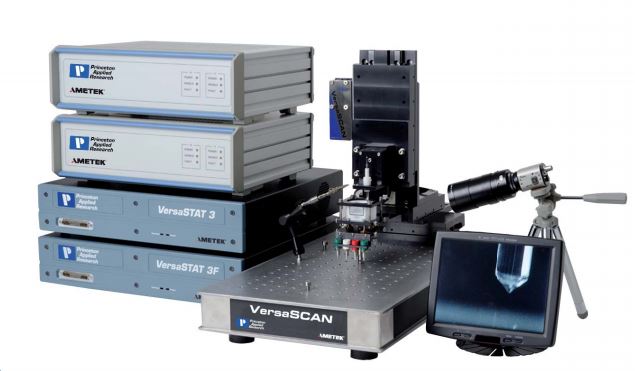 The surface of an electrode is rarely, if ever, a homogenous surface. It is often incorrectly assumed to be in order to simplify data interpretation and mathematical modeling. However, a corroding metal will certainly have areas of both anodic and cathodic nature, and a sensor will have areas of varying surface conductivity. In a traditional bulk electrochemical measurement, the current from the entire working electrode is recorded. This gives an integrated response. It is then impossible to distinguish if the sample has a uniform response distributed evenly about its surface; or a small number of sites of much greater intensity.

The VersaSCAN consists of an advanced three-dimensional closed-loop (100-nm resolution) positioning system mounted onto an optical base. Depending on the ancillary equipment mounted onto or connected to this positioning system, the VersaSCAN can provide a breadth of information. As different as each of the techniques is, they have the common goal of providing localized information relative to the sample under investigation.

In general, this is accomplished by using this advanced positioning system to bring a measurement probe to within 10s-100s of microns of the sample’s surface, without actually contacting it. When the measurement probe is within this dimension it only samples the response of the local area, not the entire electrode’s surface. The probe is then rastered across the plane above the sample. This builds a 3-dimensional map – with the X and Y being displacement of the probe and the third axis as the measured parameter (e.g., current in a SECM experiment, voltage-field in a SVP experiment, work function different in SKP, etc.)

Scanning Electrochemical Microscopy (SECM) is the most popular scanning electrochemical technique. Two (2) potentiostats are supplied to both control and measure the response of the ultramicroelectrode probe tip and the sample. SECM is unique in its high spatial resolution and application to diverse fields, including fundamental research on reaction rates, biological system, sensors, etc. The SECM uses Approach Curves to assist in positioning the probe and can image the surface in either Feedback or Generator-Collector Mode. Constant-Height and Constant-Current experiments are supplied and Constant-Distance experiments are possible in combination with the OSP module, which is described below. The supplied potentiostats can be used for a number of standard non-scanning experiments when not in use as a SECM.

Scanning Vibrating Electrode Technique (SVET or SVP) is the successor to the Scanning Reference Electrode Technique (SRET). The goal of this experiment is to map local current events at the sample’s surface. This is accomplished by measuring the voltage-drop created by those local currents in the electrolyte solution. A piezo element controls the vibration to a user-specified amplitude. The local current activity can be externally applied or naturally occurring. Since the probe is vibrating, a lock-in amplifier is employed to enhance signal recovery allowing for the accurate measurement of small signals.

Localized Electrochemical Impedance Spectroscopy (LEIS) is similar to SVP; however, the AC-nature is not a mechanical probe vibration, but an AC voltage signal imposed onto the sample by external EIS-compatible instrumentation. The resulting current is measured as a voltage-drop in solution using a dual-element probe. This experiment can acquire data at a swept frequency and constant probe position (providing a Bode and Nyqusit plot) or at a single frequency and swept probe position providing an area map. Magnitude, phase, voltage and current are recorded versus position in a single scan. Experiments can be easily looped to monitor how the response changes with time.

Scanning Kelvin Probe (SKP) is a non-electrochemical non-destructive method, typically ran in the absence of electrolyte. The goal of this measurement is to determine the relative work function difference between the sample and the probe. The sample should be conducting, but can have an insulating or semi-conducting coating on it. There are applications to the field of corrosion with the ability to image the surface under a coating and the ability to map work-function (a value relatable to Ecorr) in a non-destructive way; as well as applications to semi-conductors and the forensic sciences.

Scanning Droplet Cell (SDC) uses a machined head to move a constantly flowing droplet across the surface of the sample. The exposed working area of the electrode is only that portion in contact with the droplet of electrolyte. The flowing nature of the droplet removes reaction products as they are formed. Standard electrochemical tests are then possible in confined, local areas on the sample’s surface.

Non-contact Surface Profiler (OSP) uses a laser to measure topography of the surface of the sample. While there are many applications where topography is the end-goal, this becomes even more useful when used as a background file to run other techniques in Height-Tracking mode (e.g., constant-distance SECM). This provides a mechanism to deconvolute effects that changing probe-to-sample distance may have on the response of other scanning techniques.