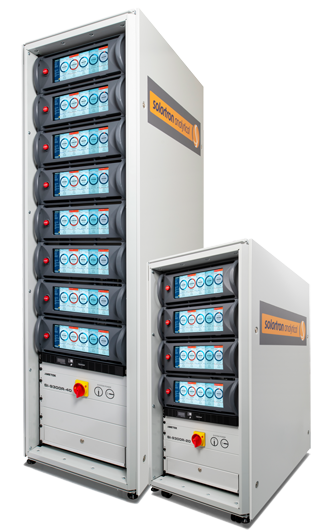 Used Nissan LEAF batteries given “second life” thanks to Solartron Analytical and WMG, University of Warwick

The ability to reuse high numbers of Electric Vehicle Lithium Ion batteries for domestic and industrial use is becoming a reality for Nissan thanks to a new grading system developed by researchers at WMG, University of Warwick using the Ametek SI-9300R.

- When electric vehicles end their life the remaining storage capacity of the lithium battery is expected to be higher than 70%. After this, they can be reused for less demanding “second life” applications such as domestic and industrial energy storage

- To make the batteries available for ‘second-life’ they need to be graded – traditionally a long and expensive process.

- A new fast grading process has been developed by researchers at WMG, University of Warwick with AMETEK instrumentation for Nissan. 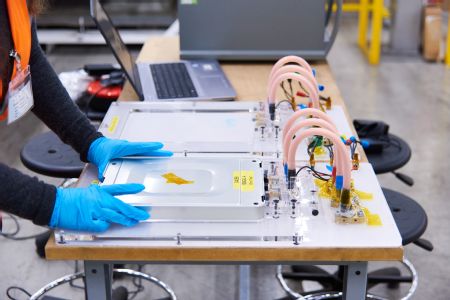 Once EV batteries have fulfilled their life-span for automotive applications, they are usually recycled by the manufacturer. However many automotive Lithium-ion (Li-ion) batteries have enough life left in them after the car is scrapped for ‘second-life’ uses both domestically and industrially.

Car company NISSAN were keen to explore ways to make a much faster grading process for their used Li-ion batteries from the NISSAN LEAF – allowing re-use of old battery packs or modules instead of disposing or recycling them.

They were challenged to demonstrate 1MWh of energy storage by the end of 2019.

Part-funded by BEIS (Business, Energy and Industrial Strategy) the ‘UK Energy Storage Laboratory’ project was launched, where 50 NISSAN LEAF batteries were used to develop the existing grading process led by NISSAN, WMG at the University of Warwick, AMETEK and Element Energy.

WMG’s battery technology experts in the Energy Innovation Centre developed a safe, robust and fast methodology for used automotive Lithium-ion batteries, at pack level. This methodology, which was initially developed in WMG, was successfully transferred to a pilot second-life facility, where the target of 1MWh of second-life energy storage was achieved.

In addition, the team at WMG developed ways of grading modules – the sub-components of battery packs in as little as 3 minutes – a process which previously took over 3 hours.

Graded second-life battery packs can provide reliable and convenient energy storage options to a range of customers: from electric roaming products – providing electricity for customers on the move, to home storage products – enabling customers with solar panels to store their energy generated. More crucially, the packs can be used for storage allowing increased intermittent renewable energy sources on the grid, without putting security of supply at risk.

“Automotive batteries deliver some great environmental benefits, but they consume a lot of resources in doing so. Opening up a second life for batteries improves both the environmental and the economic value we draw from those resources before they need recycling. I’m delighted that by working with the partners in this project, we’ve been able to make it much easier to access those second life applications.” 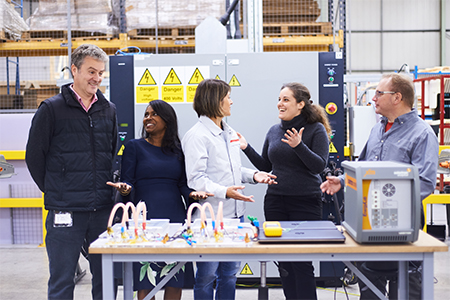 “It’s great to hear that the University of Warwick and Nissan are collaborating in pursuit of a greener, cleaner future. Reusing the batteries from electric cars could provide a valuable contribution to the UK’s green revolution - helping us lead more efficient and smarter lives as we end our contribution to climate change by 2050.

“We’ve part-funded this project to help give manufacturers more options than recycling – meaning a battery that helped a driver get from A to B could then be used to help store energy used to power a home.”

AMETEK developed specialist equipment, and worked with WMG to embed the algorithms developed into a robust and industrialized machine that can be used by Nissan and other companies to grade second life batteries.

“The algorithm was developed with assistance from AMETEK EIS analyzers. We are currently implementing the algorithm in our new family of Solartron Analytical Battery Analyzer products, including our flagship SI-9300R model, which we expect will reduce market barriers for second life applications.”

The novel process is now being trialed for grading of battery modules at the second-life pilot facility, through these two processes, NISSAN hopes to be able to re-use the vast majority of packs currently assembled in EVs in Europe.

“The number of electric vehicle batteries reaching end-of-service is set to increase from thousands to tens of thousands per annum by 2025. These batteries typically retain significant capacity and power delivery capability, and their re-use in so-called ‘second-life’ applications has been proposed as a mean to extend the battery value chain and minimize waste by deferring recycling.”

“Reconditioning car batteries has to become business as usual - it makes sense environmentally and commercially. This project has proven a scalable process to deploy reconditioning and represents a significant milestone in the UK pathway to net zero emissions.”

For more information on this project, please see the UKESL Public Report at: http://www.element-energy.co.uk/wordpress/wp-content/uploads/2020/01/UKESL-Non-technical-Public-Report_2020.pdf

*All images credit attributed to University of Warwick with exception of SI-9300R.