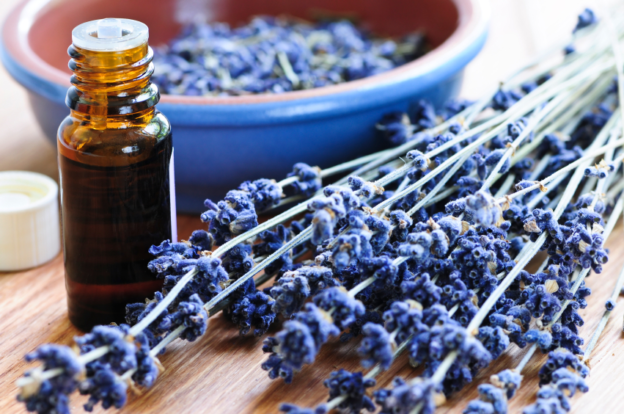 The focus of this application note is the detection of adulteration in lavender essential oil using an attenuated total reflection infrared spectrometer, the Ocean Insight Ocean MZ5. Lavender oil is one of the best-selling oils and most adulterated [2]. The Ocean MZ5 focuses on a portion (1818-909 cm-1) of the fingerprint region (~1500-500 cm-1), which gives a unique spectrum for each compound [3]. Combining this region with the use of chemometrics, a powerful tool utilizing multivariate statistical analyses and data transformations, provides even greater analysis capabilities. It was determined that the limit of detection (LOD) of lavender in sweet almond oil is 6.74% and the LOD of sweet almond oil in lavender is 7.66%.

Essential oils have been used for thousands of years in many cultures for medicinal and health purposes, with uses ranging from aromatherapy to household cleaning to holistic medicine. Essential oils are produced by extracting the desired component from plant material, which is a costly and labor-intensive process. This makes these oils prime candidates for adulteration.

Some companies choose to add other chemicals to dilute the essential oil and extend how far the pure essential oil goes. Sometimes these companies will label the new solution as a “blend,” but many times manufacturers will not, leaving consumers with a product that is less pure than stated. Common additives used in dilution are fatty oils, alcohols, other similar oils, surfactants, and emulsifiers.

The authentication of essential oils is important, not only for quality control for producers but for consumer protection [1]. With essential oils, home remedies and holistic medicine becoming more popular, adulterated products are becoming increasingly prevalent. An adulterated essential oil can cause harm to the user whether it is for topical or internal use, especially if it causes a rash or allergic reaction.

The focus of this application note is the detection of adulteration in lavender essential oil using an attenuated total reflection infrared spectrometer, the Ocean MZ5. Lavender oil is one of the best-selling oils and most adulterated [2]. The Ocean MZ5 focuses on a portion (1818-909 cm-1) of the fingerprint region (~1500-500 cm-1), which gives a unique spectrum for each compound [3]. Combining this region with the use of chemometrics, a powerful tool utilizing multivariate statistical analyses and data transformations, provides even greater analysis capabilities. It was determined that the limit of detection (LOD) of lavender in sweet almond oil is 6.74% and the LOD of sweet almond oil in lavender is 7.66%.

Essential oils are said to have a variety of uses and health benefits, with lavender oil being a popular choice among essential oil users. Ancient Romans and Egyptians used lavender as perfume, for bathing, and cooking. Users and manufacturers of lavender oil claim it provides anxiety relief, restful sleep, reduction of skin blemishes and irritation, and scent and flavor benefits [4]. Lavandula angustifolia (formerly L. officinalis) is stated as “true lavender” and is the top choice for lavender essential oils. Many claim “true lavender” has the most medicinal properties and is sweeter scented compared to other varieties. It was originally called English lavender because it was used as the basis of England’s lavender oil industry in the 1700s.

In this study, the Ocean MZ5 was used along with chemometrics, a multivariate analysis method. Rather than using a single peak on the spectrum to produce a calibration curve, which is typical of absorbance measurement analysis, chemometrics uses the whole spectrum. Several reasons this type of analysis is used include the complexity of the sample, spectra that may have baseline shifts, and to account for more nuances in the whole spectrum.

Chemometrics allows small differences in the spectra to become more distinct through preprocessing transformations, along with multivariate statistical analyses. It allows the user to quantify, classify or discriminate samples. Quantification tells how much of a certain substance is in a sample, classification gives the identity of the sample, and discrimination says whether a sample is comparable to a standard. Two common methods of chemometric analysis, used in this experiment, are principal component analysis (PCA) and partial least square regression (PLS).

Chemometrics works by taking a training set to create a model and a test set to validate this model. When a test set is not available, cross-validation (testing the model with spectra taken from the original data set) will be used to validate the model.  When it comes to complex samples, where traditional spectroscopic analysis may fail, chemometrics shines. In measurements where one peak may not define the sample, the whole spectrum can be used. The information from the spectra are extracted in a way that independent, orthogonal, factors (also referred to as principal components) are found to account for the most variation in the data. Each factor has a loading based on where the most important or influential data lies on the spectra. From this loading a score is determined, which is the contribution of each loading. This occurs for every spectrum, so each will have a score attributed for each loading.

Nature’s Truth 100% Pure Lavender Essential Oil (Lavandula angustifolia, formerly L. officinalis) was diluted with Nature’s Truth 100% Pure Sweet Almond Oil – a fatty oil. Nature’s Truth verifies its oil purity using GC-MS techniques. Solutions were prepared in 5 mL vials using a micropipette to produce a range of 0%-100% lavender oil in sweet almond oil, in increments of 20%.  Two sets of 6 samples were made for the calibration set and a test set of 5 samples was made to project onto the model.

Initially, the absorbance spectra of the lavender oil/sweet almond oil solutions were plotted to see if there were distinct differences in the spectra or if it was immediately obvious that some preprocessing needed to be performed.

Upon visual inspection, the spectra appear to have differences that depend on concentration, seen in Figure 1. To determine if separation and clustering of the data is possible, principal component analysis (PCA) was preformed, shown in the Figure 1 inset. PCA is a common method used to determine grouping of data. While each of the concentrations is separated from one another, individually they are not tightly clustered. The groups of the same concentration should be clustered together, rather than in two separate clusters like they are. There was no change in experimental parameters, concentrations, or any other variable so this is likely due to baseline shifting while taking the measurements over a few days.

To account for baseline shifting a standard normal variate (SNV) transformation was performed on the spectra, to investigate if further clustering of the already separated data could be achieved. SNV is a pretreatment that is used often with many infrared spectra to adjust for these effects. SNV is applied to every spectrum individually, where the average and standard deviation of all the data points are calculated, then each data point of the spectrum is subtracted from the mean and divided by the standard deviation. After this, the spectra are centered and scaled, shown in Figure 2. The date is clustered tighter together after the SNV transformation, shown in Figure 2 inset.

After doing a PCA analysis, a partial least square regression (PLS) model was created to quantify the data. The model was trained with the SNV transformed data, which gave good clustering of the data as it did with the PCA analysis, shown in Figure 3 below.

The PLS model was initially estimated at 7 factors and found to be optimal at 1 factor, accounting for most of the explained variance. By expanding to the second factor there was only an explained variance gain of 0.1905%. Including additional factors does not improve the model.

Cross validation of the data yielded a high R2 value of 0.9964 and root mean square error of the cross validation (RMSECV) of 2.0359% (v/v), shown in Figure 4. Then this model was used for prediction of the lavender content of the test sample set.

The LOD was determined by using the formula: LOD = 3.3 σ /m. Where σ is the standard deviation and m is the slope of the calibration curve. The LOD of this model is presented in Table 3 as lavender in sweet almond oil and sweet almond oil in lavender, which is done by changing whether the model is trained with lavender or sweet almond oil as the represented component.

The test sample set projection on the model produced a line with a high R2 value of 0.9893 with a RMSEP (root mean square error of prediction) of 3.0874%, shown in Figure 5. While the RMSEP was around 3%, deviation from the actual and predicted values ranged from 1%-2.5%.

The Ocean MZ5 ATR spectrometer uses the IR fingerprint region to discriminate among different compounds due to the unique bands for each compound. Coupled with chemometric analyses and spectral transformations, the differences between different compounds and similarities between the same compounds become even more distinct, as seen in this study. It was determined that the limit of detection (LOD) of lavender in sweet almond oil is 6.74% and the LOD of sweet almond oil in lavender is 7.66%.