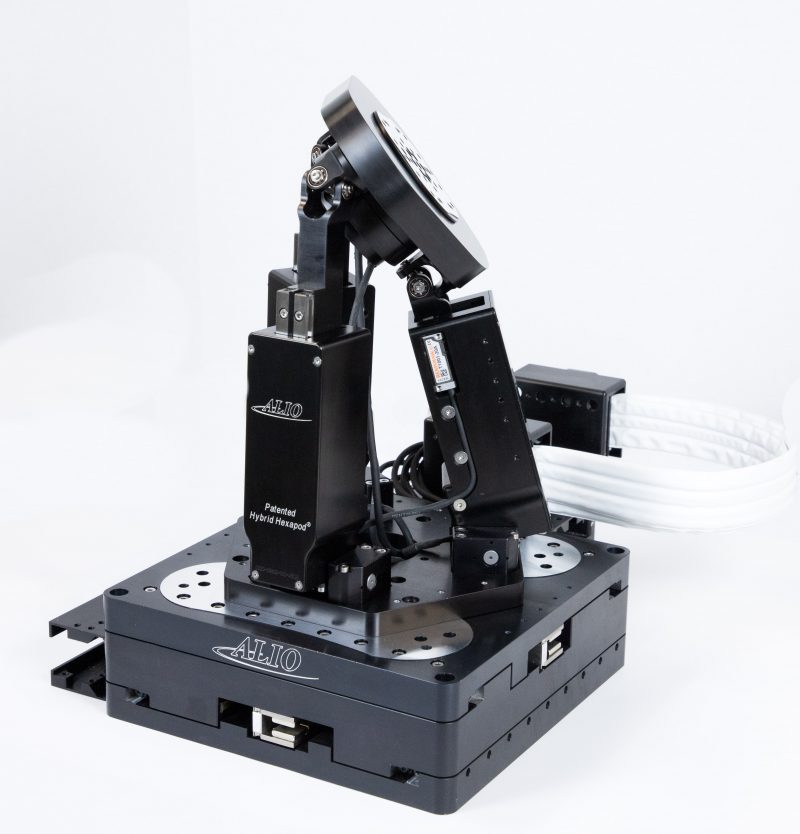 The Hybrid Hexapod® was developed by ALIO Industries to address the inherent performance limitations of conventional hexapods. ALIO’s Patented 6-DOF design seamlessly blends and takes advantage of the strengths of serial and parallel kinematic structures while avoiding their weaknesses. The Hybrid Hexapod offers far greater functional versatility, nanometer-level accuracy, repeatability, and superior 6-DOF trajectories than is possible with any traditional hexapod or stacked stage configuration.

Standard hexapods satisfactorily service applications where micron motion tolerances are required, but as the demand for nanometer requirements expands, standard hexapods struggle. This is because there are performance limitations inherent in all “conventional” hexapod designs.  They operate within 3-dimensional space, and have errors in all 6 DOF.  However, hexapod motion systems have typically only been characterized by performance data of a single degree of freedom.  This practice leaves error sources unaccounted for in several degrees of freedom, especially in the areas of flatness and straightness, which are critical precision needs at the nanometer-level.  The hexapod’s best flatness and straightness of travel is still no more precise than more than 2 orders of magnitude (2 decimal point less) for basic XY motion.

Because hexapods have six independently controlled links joined together moving a common platform, the motion error of the platform will be a function of the errors of ALL links and joints.  Hexapods are known to have optimum precision when performing Z-axis moves, because all links perform the same motion at the same relative link angle.  However, when any other X, Y, pitch, yaw or roll motion is commanded, precision and geometric path performance of the hexapod degrades substantially because all links are performing different motions.  In the case of conventional hexapods built with non-precision joints, bearings, and motion controllers that are not capable of forward and inverse kinematics equations, the source of error is even more pronounced.

The unique design of the Hybrid Hexapod® is comprised of a parallel kinematic tripod to deliver Z plane and tip/tilt motion. This tripod is integrated with a monolithic serial kinematic stage for XY planar motion. A rotary stage integrated into the top of the tripod (or beneath depending on application needs) provides 360- degree continuous  (Theta-Z) rotation.